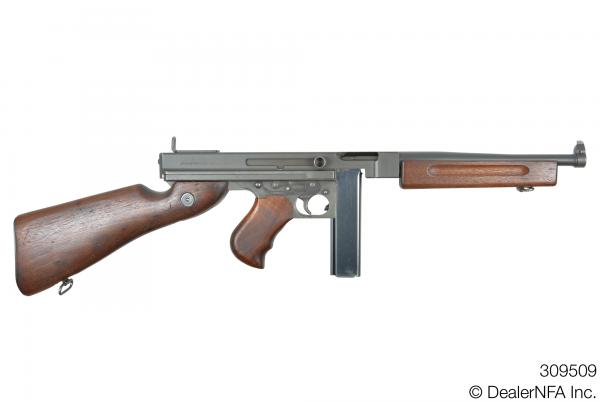 This M1 Thompson is in very nice overall condition, and would be an excellent shooter and/or collector piece. This Thompson is especially interesting to anyone who wants a higher cyclic rate, simpler design, made for our military during the dark days of WWII.

We have the following transferable M1 Thompson Submachine Gun, manufactured by Auto-Ordnance in Bridgeport, CT, serial number 309509 available for sale. This weapon was manufactured sometime during the Fall of 1942, just prior to the M1A1 model changeover, and it retains many features characteristic of early M1 Thompsons. It has been refinished, but does not show signs of having been through an official U.S. Ordnance Rebuild Program, as it still retains the original “M1” marking on the receiver, without the “A1” update to M1A1. It features the unprotected, early style Lyman “L” sight, and has an M1 bolt, which was the originally designed, floating firing pin bolt that later became simplified to a fixed firing pin on the M1A1 version. It has the later buttstock featuring a reinforcing crossbolt. It has an Ordnance wheel marking stamped on the receiver, as well as a “GHD” inspector stamp, indicating it was inspected under the supervision of Army Inspector of Ordnance Colonel Guy H. Drewery of the Springfield Ordnance District during WWII. Such an inspector stamp is the easiest way to quickly identify an Auto-Ordnance Bridgeport manufactured M1, since Savage M1’s were not marked with “S” prefixes like the earlier M1928A1 models, and are extremely similar to the M1’s manufactured by Auto-Ordnance in Bridgeport, CT. The trigger frame serial number on this Thompson does not match the receiver, indicating it was switched out at some point in its life, although the weapon does not show markings of an arsenal rebuild, where lowers were often switched out as a matter of convenience. The horizontal foregrip is marked with an “F,” indicating it was manufactured by Lindstrom Co. in Bridgeport, CT.