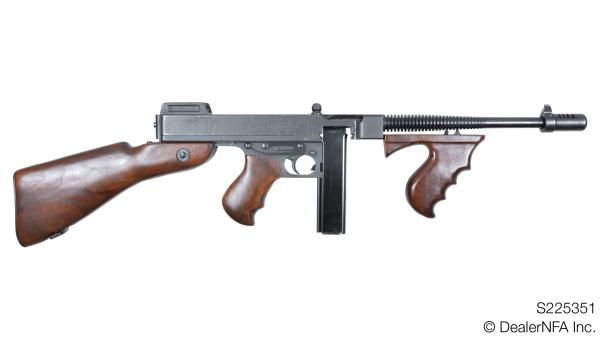 This Thompson Submachine Gun, Model of 1928A1, serial number S-225351 was manufactured under contract by Savage Arms in Utica, NY for the Auto-Ordnance Corporation of Bridgeport, CT, most likely in early September, 1941.

While we do not have exact dates for production, some total production documentation exists, which includes a summary from Savage of their annual production, dated 19 December 1945, which indicated the following:

Production of Savage Thompsons is believed to have started at serial 15,041, picking up where the Colt serial number range stopped. Based on the above data from Frank Iannamico’s wonderful book, “American Thunder III,” the serial number production month rough estimate was made as follows:

When Russell Maguire acquired Auto-Ordnance in 1939, just before war broke out in Europe, he did not have a manufacturing facility, so he contracted with Savage Arms in 1940 to produce Thompson Submachine Guns. The first Savage Thompsons came off the assembly line in April, 1940. Savage continued to manufacture Model of 1928A1 and M1/M1A1’s up until 1944, while the Auto-Ordnance company factory in Bridgeport, CT also produced the same models from late 1941 to 1944. Thompsons manufactured by both companies were marked with the Auto-Ordnance, Bridgeport marking. Savage manufactured 1928’s can easily be identified as Savage by their “S” prefix.

This Savage Thompson appears to have its original DuLite finish, which is a highly desirable condition. Its metal finish has honest wear, showing many scratches and handling marks, to be expected on an 80+ year old firearm. The serial numbers on the receiver and lower frame match, which is also a highly desirable trait, as many were switched with other lowers during arsenal rebuild. This weapon does not appear to have ever been arsenal rebuilt. This Thompson features a vertical foregrip, a pinned Cutts Compensator, finned barrel, riveted ejector, and earlier style, checkered fire control levers. The actuator is the early production, checkered type. The left side of the receiver features military acceptance markings characteristic of the Rochester Ordnance District, including the Ordnance Department “Flaming Bomb” mark, along with an “RLB” stamp for LTC. Ray L. Bowlin, who was the Army Inspector of Ordnance for the district from 1940-42. It is also stamped “GEG” for George E. Goll, who was the company inspector for Auto-Ordnance at the Savage production facility. Incidentally, George E. Goll was the longest serving employee of Auto-Ordnance, starting as General Thompson’s driver, and later becoming President of the Auto-Ordnance Division of Maguire Industries. Mr. Goll’s image was also featured in several examples of early 1920’s Auto-Ordnance sales literature. On the right side of the receiver, it has the Bridgeport address to the right, and the patent numbers to the left hand side, making it a “4th” Savage type receiver, as referenced in Tom Davis’ excellent book, “Great Britain – The Tommy Gun Story.”

This early Savage Thompson has some very desirable characteristics, most notably the original finish, matching upper and lower serial numbers, and it is not arsenal refinished. This would be an excellent addition to someone’s collection who wants to have an original condition M1928-A1 Thompson.