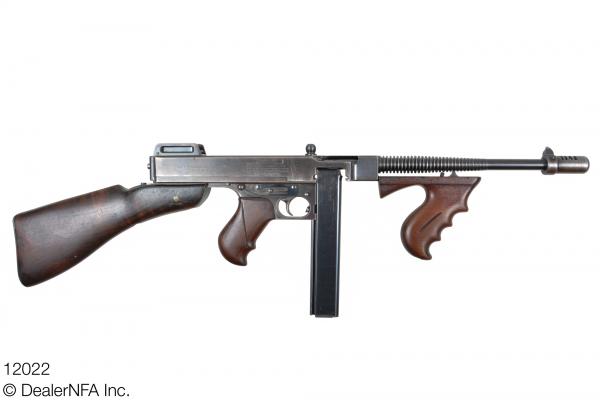 Offered for sale is an Auto-Ordnance Model of 1928 Thompson Submachine Gun, serial number 12022, which was manufactured by Colt’s Patent Firearms Manufacturing Company for the Auto-Ordnance Corporation between May 15, and May 20, 1922.  This is one of the original 15,000 Colt Thompsons, which range in serial number from 41 to 15040.  This model is commonly referred to by collectors as a “Navy Overstamp,” as well as a “Navy Model.”  Colt Thompsons were originally manufactured in 1921A configuration, without a compensator, and were marked “Model of 1921.”  When the U.S. Navy considered a sizeable purchase of Colt Thompsons in the late 1920’s, they wanted the cyclic rate reduced, and a compensator added.  This resulted in the 1928AC configuration, and in addition to the compensator, the original actuator was replaced with a heavier actuator.   The “1” in “Model of 1921” was over-stamped with an “8,” and “U.S. Navy” was added above the model markings. This Thompson configuration was sold to civilian and military entities with the Navy marking, and is the most commonly encountered Colt Thompson model.

This is certainly a heavily worn, and likely “history-soaked” Thompson Submachine Gun. As the wishful saying goes, “if this gun could talk,” it would tell quite a story.  Most Colt Thompsons in private hands today served honorably with various law enforcement agencies for decades.  Very few Colt Thompsons survive today that served in the U.S. Military, let alone the U.S. Army, where they were either consumed by conflict, or eventually officially destroyed. What makes #12022 different?  This Colt Thompson served with the Kentucky (Army) National Guard out of Frankfort, KY, and is listed in Gordon Herigstad’s book, “Colt Thompson Serial Numbers.” It’s a military Colt that formerly served our country, and has survived to be owned by a lucky individual today.  It’s been out of circulation for many years, and has now returned to the market.

As previously mentioned, this Colt Thompson shows significant finish wear, with very little original bluing remaining.  While this may sound like a negative, the overall condition of the Colt appears better in person, and its patina is evidence of its honorable career.  The receiver and the lower frame serial numbers match.  The buttstock appears correct, though no Remington anchor marking remains visible through the years of sweat, and wear and tear.  The rear grip, and the vertical foregrip are also original.  They have both had simple carvings performed on them, for a reason probably only known to a Kentucky National Guard soldier of long ago.  If I were to guess, the carvings in the wood may be for sweat relief.  The buttstock has a crack, and features a vintage crossbolt style repair, probably from 70+ years ago, with similarity to British armorer repairs.  The bottom of the trigger guard has 3 series of etched numbers applied, of unknown significance. The Cutts compensator is a Type II, marked with the Cutts logo, and various patent numbers.  The 1928 style actuator is the two-piece type, which is a desirable collectors item.  It is recommended to whoever purchases this Colt that they replace the internals, particularly the actuator, with a WWII type, to ensure that the original actuator does not become damaged, as they are extremely difficult and expensive to replace. All other internals appear original. The original barrel is in good condition, and aligns correctly with the receiver index marking.

Kentucky National Guard Colt Thompson serial number 12022 is a piece of military history.  It would do well in any collection, whether beginner, or advanced.  If a buyer installs replacement internals, it would still be a great shooter.  When inspected in person, this Colt called out to this writer more than any of the 6 other Colts reviewed that day, because it screams “History!” though we will never know all the details.  Its provenance, patina, and unique individual features will surely also beckon a new owner who can be proud to become this Thompson’s next caretaker.