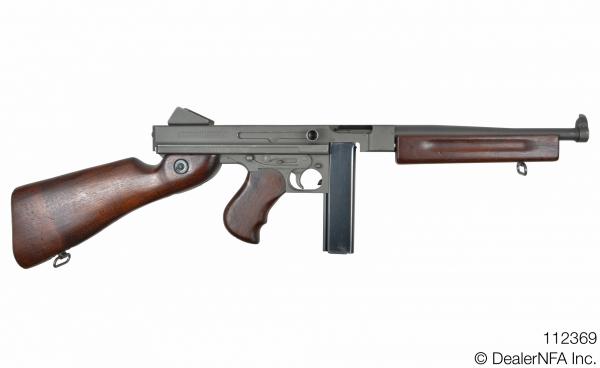 We have the following transferable Savage manufactured M1 Thompson Submachine Gun, serial number 112369 available for sale. This weapon was likely manufactured in the early Fall of 1942. It has been refinished, but does not show signs of having been through an official U.S. Ordnance Rebuild Program, as it still retains the original “M1” marking on the receiver, without the “A1” update to M1A1. It features the later, protected style rear sight, and has an M1 bolt, which has the original design, floating firing pin that was later simplified in the M1A1 version. The buttstock is the later, reinforced style, consistent with M1A1 arsenal rebuilds. The receiver has been prick-punched to indicate the barrel was replaced, and the barrel is of Savage manufacture. It has an Ordnance wheel marking stamped on the left side of the receiver, as well as an “FJA” inspector stamp, indicating it was inspected under the supervision of Army Inspector of Ordnance Frank J. Atwood of the Rochester Ordnance District during WWII. Such an inspector stamp is the easiest way to quickly identify a Savage M1, since they were not marked with “S” prefixes like the earlier M1928A1 models, and are extremely similar to the M1’s manufactured by Auto-Ordnance in Bridgeport, CT. It also features the Auto-Ordnance acceptance stamp of “GEG” for George E. Goll. The “GEG” stamp appears twice; once on the receiver nose, and once above the magazine well. George E. Goll was the longest serving employee of Auto-Ordnance, beginning as General Thompson’s chauffeur, and he ended up becoming the President of the Auto-Ordnance Division of Maguire Industries during WWII. The trigger frame serial number on this Thompson does not match the receiver, and is serial number 508172, which is also consistent with an arsenal rebuild, as trigger frames were not required to remain with their original receivers, and the practice of serial numbering trigger frames was later discontinued. The horizontal foregrip is marked with an “M,” indicating manufacture by Strombeck-Becker, which was a toy company who made stocks during WWII.

The weapon comes with a 30-round magazine. This M1 Thompson is unique in that it avoided being marked as an M1A1, but M1A1 rebuild standards appear to have been applied to it. It would be a great shooter, and M1’s usually run at a slightly higher cyclic rate than their M1928A1 counterparts, which can be useful in steel competitions at Thompson shoots. It’s a good looking weapon that will become a favorite addition to a lucky new owner’s gun safe.