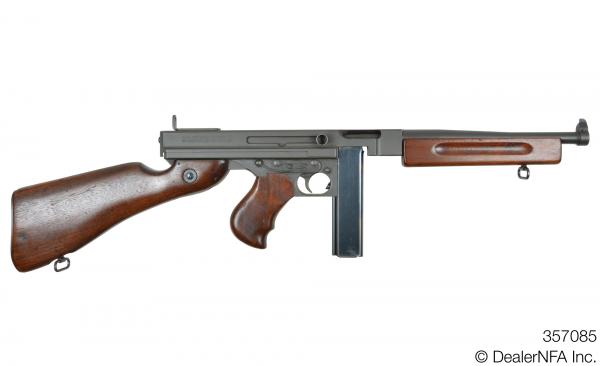 We have the following transferable M1A1 Thompson Submachine Gun, manufactured by Auto-Ordnance in Bridgeport, CT, serial number 357085 available for sale.

At the time this M1A1 Thompson was manufactured, which was sometime between late 1942, and early 1943, Auto-Ordnance had experienced difficulty changing over from M1928A1 production to that of the new M1 model.  Receivers were originally marked “M1,” but were updated to “M1A1” with the “A1” being hand stamped. This weapon has an Ordnance wheel marking stamped on the receiver, as well as a “GHD” inspector stamp, indicating it was inspected under the supervision of Army Inspector of Ordnance Colonel Guy H. Drewery of the Springfield Ordnance District during WWII.  Such an inspector stamp is the easiest way to quickly identify an Auto-Ordnance Bridgeport manufactured M1/M1A1, since Savage M1’s were not marked with “S” prefixes like the earlier M1928A1 models, and are extremely similar to the M1’s manufactured by Auto-Ordnance in Bridgeport, CT. This weapon features the unprotected, early style Lyman “L” sight, has the later buttstock with a reinforcing crossbolt, and pin-style fire control levers. It went through an official U.S. Ordnance Rebuild Program at the August Arsenal in Georgia at some point in its life, as evidenced by the “AAF” mark on the buttstock, which also shows some signs of repair.  August Arsenal used a marking of “AA” followed by another initial to indicate who supervised the rebuild, so the “AAF” marking should not be mistaken to stand for “Army Air Forces.”  It is also marked “US Property” on the rear top of the receiver.  The buttstock, pistol grip, and horizontal foregrip all have various dings from use, as does the receiver.  The receiver nose and barrel have been prick punched to indicate barrel replacement, probably during the arsenal rebuild.

This Thompson shows signs of its history through the military markings present on it, in addition to those of a Police Department.  “Prop. of Garde City Police” is electropencil etched on the left side of the receiver.  It is assumed that “Garde” is supposed to be “Garden,” which represents potential service in Police Departments in a number of cities bearing the Garden City name in states such as CO, GA, KS, ID, MI, and NJ. Perhaps the new owner could initiate an FOIA that might shed further light on its history.

This M1A1 Thompson certainly has a service history, both military and civilian, and would be a great shooter or collector piece. It is especially interesting to anyone who wants a higher cyclic rate, simpler design, made for our military during the dark days of WWII.