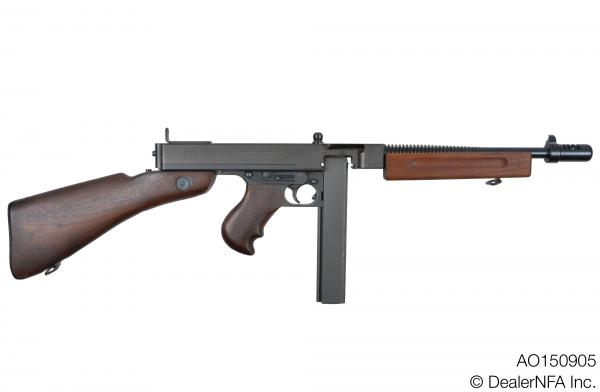 We have the following transferable M1928A1 Thompson Submachine Gun, manufactured by Auto-Ordnance in Bridgeport, CT, serial number 150905 available for sale.  This Thompson has been refinished, possibly during an arsenal rebuild or later in its life.  It was probably manufactured in the Spring of 1942, just before the weapon was reclassified as “Limited Standard,” and replaced by the M1 Thompson.  This conclusion is based on the serial number, and inspector marking.

The receiver nose has been prick-punched to indicate a barrel replacement, and the replacement barrel was manufactured by Savage, and has a blued finish.  The weapon features an unprotected, early style Lyman “L” sight, which was standard after about the 80,000 serial number range, according to Frank Iannamico’s excellent book, American Thunder, Third Edition.  The weapon currently has a horizontal foregrip installed, as it did when originally manufactured, but it also comes with an original vertical foregrip.  The left side of the receiver is stamped with an Ordnance wheel marking, as well as a “WB” inspector stamp, indicating it was inspected under the supervision of Army Inspector of Ordnance Col. Waldemar S. Broberg, who was Army Inspector of Ordnance for the Springfield Ordnance District from July 1941 to June 16, 1942.  The trigger frame serial number on this Thompson matches the receiver.

The actuator is the later type, manufactured by Savage. The Blish lock and bolt are also of Savage manufacture.  The compensator is a 4th type, consistent with those installed on military M1928A1 Thompsons.  The picture of the vertical foregrip by itself has a buffer disk shown on the bolt.

This very nice overall condition M1928A1 Thompson would be an excellent shooter and/or collector piece for the new collector, or for someone who wants to expand their collection to include a Bridgeport manufactured Thompson Submachine Gun.