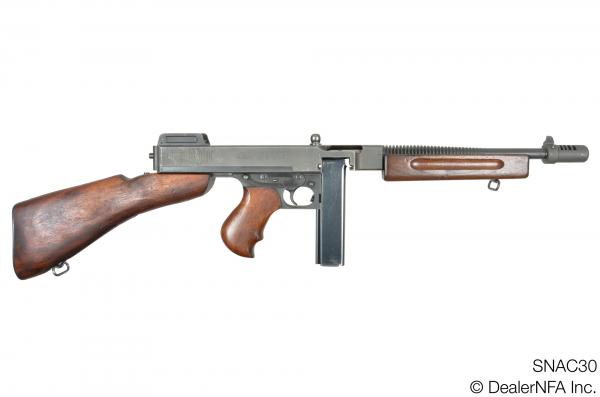 We have a Thompson Submachine Gun, Model of 1928, serial number S-NAC -30 available for sale.  This is a unique Thompson, in that it is what is commonly known in the Thompson collector community as a “crate gun.”  What is a “crate gun?”  Well, in order to understand this, one must become familiar with the succession of the Thompson assets through the time when this particular Thompson was officially manufactured.

The Auto-Ordnance Corporation (AOC) began in 1916 with intent to design and build an automatic rifle for use in the Great War.  That effort missed its mark, and developed into a submachine gun design that successfully came about in 1919, very similar to the Colt Thompsons we all love today.  AOC made a few changes to the Model of 1919 design, which subsequently became the Model of 1921 Thompson Submachine Gun, which was contracted to Colt to manufacture 15,000 units between 1921 and 1922.  This did not turn out to be a commercially successful venture, and almost 5000 Colt Thompsons remained in inventory as the winds of war developed in Europe in 1939, 17 years after the last Thompson rolled off the line at Colt.  The last remaining Colt Thompsons were sold in 1940, but the company changed hands in 1939 to its new owner, Russell Maguire, who very luckily timed his purchase as demand skyrocketed for the war effort.  Maguire contracted new production with Savage Arms, who would become the second manufacturer of the Thompson.  Savage began producing Thompsons in April, 1940, and Mr. Maguire went about looking to set up a factory for himself, which became located in Bridgeport, CT, and began production in late 1941.  So at this point, we had 3 entities that had manufactured the Thompson for AOC…Colt, Savage, and AOC itself, whose Thompsons are commonly referred to as “Bridgeports.”

Over a million and a half Thompsons later, and after being officially replaced by the M3 Greasegun, AOC found itself attempting to diversify into other products, some ordnance related, and some not.  The AOC Thompson assets from Colt, Savage, and AOC Bridgeport were consolidated in Bridgeport, and represented a collection of complete and incomplete firearms, parts, machinery, tools, and goodwill that the new Maguire Industries decided to liquidate.  This included the early prototype Thompsons, Model of 1919 Thompsons, the Blish pistol that had been patented to demonstrate the Blish principle of metallic adhesion that was incorporated into the Thompson design, as well as many bare receivers and parts that were crated up.  This is where the “crate” gun moniker came from.

The first sale of the Thompson assets occurred in 1949, when Russell Maguire hired former AOC VP Frederic Willis to market them.  Kilgore Manufacturing Company of Westerville, OH bought the assets, and intended to set up a production line to continue manufacture of the M1 Thompson.  This is evidenced by a Kilgore sales flyer of the period.  Unfortunately, in 1950, Kilgore experienced a catastrophic explosion involving their pyrotechnic product aboard a ship, which killed many people, and the company reverted to protective mode, and decided not to proceed with Thompson production.  The Thompson assets were then sold by Kilgore to a consortium of investors that Frederic Willis put together.  In 1951, the Thompson assets were sold by the Willis group to George Numrich of Numrich Arms Company in Mamaroneck, NY. (Subsequently West Hurley, NY, and now known as “Gun Parts Corporation”)

So then, Numrich Arms (NAC) began to go through the crates, and advertise themselves as manufacturers of the Thompson Submachine Gun.  They assembled Thompsons, thereby manufacturing them, and stamped them with NAC prefix serial numbers.  There were several Colt receiver NACs, there were Savage NACs, and there were Bridgeport NACs.  Since Savage receivers were manufactured with the “S” already marked for their serial number designation, NAC Savage Thompsons are ordinarily marked like this one, which is serial number S-NAC-30.  So, this is a “crate” gun that was made from a leftover Savage 1928 receiver, and was likely originally sold by Numrich during the 1950’s.  It is known that a later, similar NAC Savage Thompson serial number S-NAC-34 was registered in June, 1960.

This particular NAC Thompson is roll stamped on the left side of the receiver, “MODEL OF 1928.”  It does not have any Ordnance or inspector markings stamped on it, since it did not have a serial number marked on it when the receiver was originally produced, and it never saw military service.  It is a 4th variation Savage receiver.  It has a horizontal foregrip that was manufactured by Strombeck-Becker, and a Savage pistol grip. The “smooth style” actuator has a square “S” marking, indicating manufacture by Stevens.  It has a Savage Blish lock, and Savage bolt.  The barrel is also Savage, and does not exactly line up with the receiver index mark.  It also has a prick punch mark on both the receiver, and barrel.  The compensator is a 4th style Cutts.  This Thompson has been refinished at some point in its life, to include the barrel.  It reportedly served in the Illinois Prison system after being sold by Numrich, however this service is unsubstantiated.

The number of NAC Thompsons is much smaller than any other Thompson Submachine Gun type.  They attract attention at collector gatherings, and have a unique place in the overall Thompson line of succession.  As such, adding a NAC Thompson to your collection can be a solid first choice, or an advanced collector choice for someone who wants to own a Thompson from all the different eras in the Thompson line of succession.  This is your opportunity.  There aren’t many of these out there.