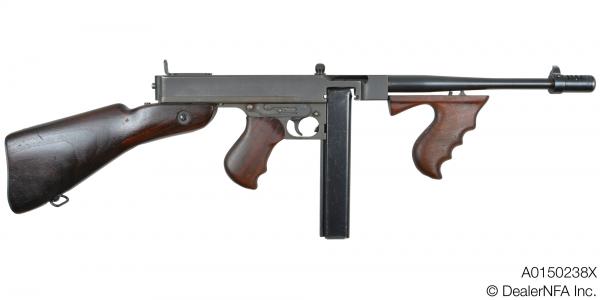 This Model 1928AC Thompson, serial number AO150238X, was made by Auto-Ordnance at the Bridgeport, CT plant.

These receivers were originally built as Model 1928A1’s, but were apparently either pulled from production, or assembled with remaining receivers for domestic sales to police and other civilian entities during and after WWII.  Thompsons such as this did not have military inspector markings added, and since they were not destined to the military, they had the “U.S.,” and the “1” in “28A1” ground off the receiver markings.  The “1” was replaced with a “C,” which indicates the presence of a Cutts compensator, utilizing the original Auto-Ordnance nomenclature for the model type.  Thus, the model is known as a “Model 1928AC.”  Many examples of this lesser encountered Thompson variation, including this one, had an “X” suffix added to the serial number.  Examples of these were sold by Auto-Ordnance as late as 1946, and were put together with spare parts.  Many have smooth barrels like this one, which is technically correct for the model, based on the available factory parts of the time.  This is an opportunity to own a unique Thompson, whether you’re buying your first one, or you want to add this variation to the TSMG’s you already own.