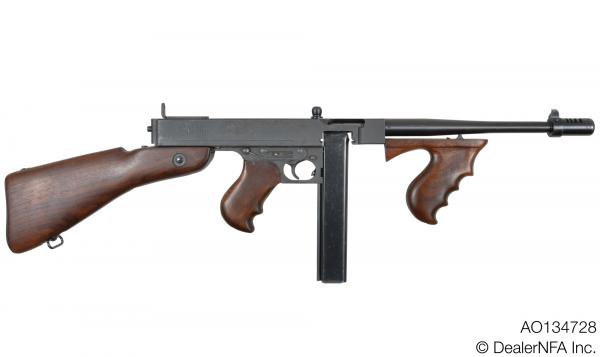 We have the following transferable Thompson Submachine Gun available for sale.  It is what is known as a 1928AC variation, manufactured by Auto-Ordnance in Bridgeport, CT, and is serial number 134728.  It was made up from what Auto Ordnance had left over for parts after production of the M1928A1 concluded in 1942.  This receiver was originally marked “U.S. Model 1928 A1,” but had the “U.S.” ground off, and the “1” overstamped with a “C” to denote a compensator, reverting back to earlier commercial designations used by the company.  This Thompson did not see military service.  Many of these types of Thompsons were purchased by police departments during, or immediately after WWII.

The weapon appears to have its original finish, which has considerable brown freckling, as can be seen in the photos. It features an unprotected, early style Lyman “L” sight, which was standard after about the 80,000 serial number range, according to Frank Iannamico’s excellent book, American Thunder, Third Edition.  It also has a smooth barrel, standard for a late production 1928.  The weapon has a vertical foregrip installed, which is probably what it was originally provided with, since this Thompson did not end up being sold to the military, which had standardized on the horizontal foregrip.  The trigger frame serial number matches the receiver.  The actuator is the later, smooth type.  The compensator is a 4th type, the same as those installed on military M1928A1 Thompsons.

This would be a great shooter Thompson for a first time buyer, or a collector piece for someone who wants to add a Model 1928AC variation to their collection.