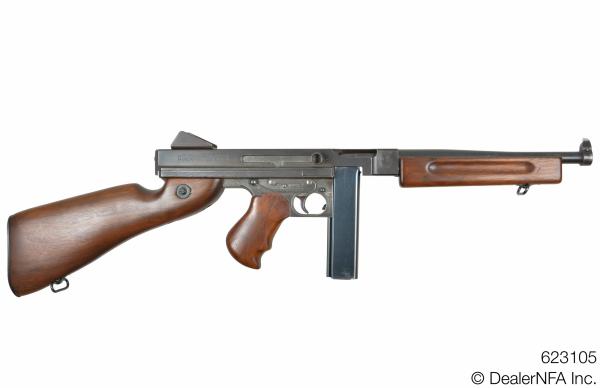 This weapon appears to have its original finish, which is unusual for an M1A1 Thompson, as most went through arsenal rebuilds at some point in their service.  No arsenal rebuild marks are visible on any of its surfaces.  The weapon features the later style Lyman sight with protective ears, and the later style buttstock featuring a reinforcing crossbolt.  Its horizontal foregrip is marked with an “M,” indicating manufacture by Strombeck-Becker during WWII, and all the wood on this M1A1 is very nice.  It has an Ordnance wheel marking stamped on the receiver, as well as an “FJA” inspector stamp, indicating it was inspected under the supervision of Army Inspector of Ordnance Frank J. Atwood of the Rochester Ordnance District during WWII.  Such an inspector stamp is the easiest way to quickly identify a Savage M1, since they were not marked with “S” prefixes like the earlier M1928A1 models, and are extremely similar to the M1A1’s manufactured by Auto-Ordnance in Bridgeport, CT.  It also features the Auto-Ordnance acceptance stamp of “GEG” for George E. Goll.  The “GEG” stamp appears twice; once on the receiver nose, and once above the magazine well.  George E. Goll was the longest serving employee of Auto-Ordnance, beginning as General Thompson’s chauffeur, and he ended up becoming the President of the Auto-Ordnance Division of Maguire Industries during WWII.  This M1A1 also features a “U.S. Property” mark on the top rear of the receiver, in two lines, which is characteristic of Savage manufacture.  The trigger frame serial number on this Thompson does not match the receiver, as it is serial number 31977, versus the receiver serial number of 623105.  Trigger frames were commonly switched out during service, and at some point during production, serial numbering the lower frame was discontinued.

This is a great “shooter” M1A1 Thompson, with the added intrigue of what appears to be its original finish.  It’s a fine looking example of an M1A1 Thompson that was manufactured at the height of WWII.